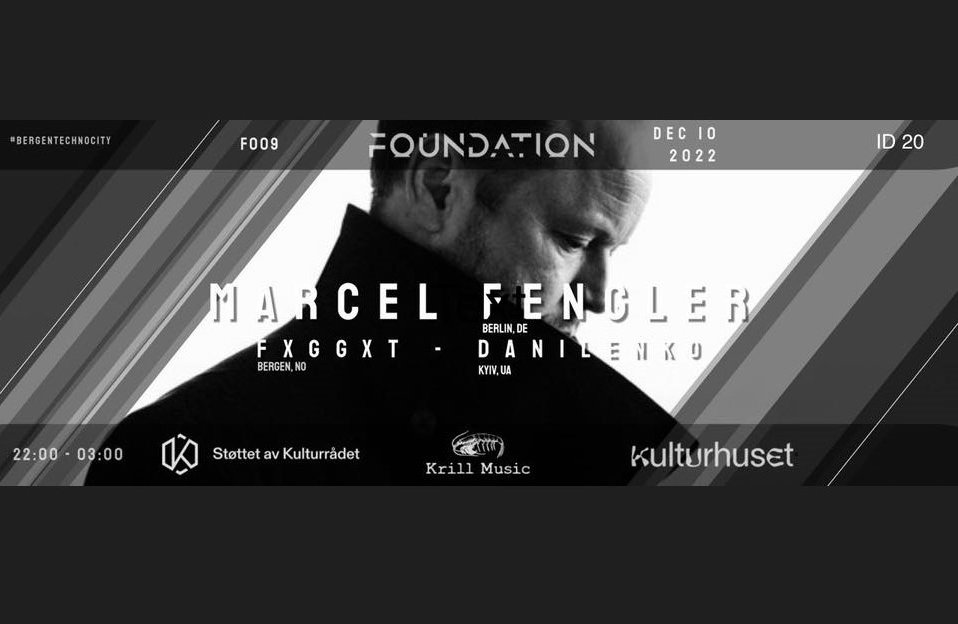 Fra det engelske presseskrivet:
Foundation by Krill Music presents: Marcel Fengler | Danilenko | fxggxt.
Marcel Fengler has been quoted as „one of the finest techno DJs“ (Resident Advisor), and has earned international respect for his „well-crafted body of production work“ (FACT) and introducing his unique and „multi-faceted personality“ (Electronic Beats).
Over the last two decades, Fengler developed a versatile and dynamic style of DJing that made him one of the first resident DJs of Berlin’s infamous Berghain / Panorama Bar in 2005. Fengler is capable of changing pace, atmosphere, and energy reacting to the mood on the dance floor: whether industrial-drenched hardness, broken beats, gloomy dubs or melodic and funky grooves – Fengler draws from a varied repertoire.

His first singles were released on Ostgut Ton and Mote Evolver and his debut album „Fokus“ (2013), in particular, was a statement of intent, full of emotional and unexpected contrasts. To showcase his melodic groove, beat tracks and his straighter cuts, he founded his imprint Index Marcel Fengler (IMF) in 2011 – a platform that not only continues evolving with his timeless techno approach but also represents a creative hub to introduce new and young talents as well as his other alias AZUR started in 2018 and focusing on more melodic soundscapes. As a DJ and producer, techno is for Marcel an unconditional passion as well as an essential part of his identity. He’s not bound to a linear one-dimensional sound, instead he’s constantly seeking for new ways to express his musical storytelling skills and show his true vision of techno, which makes Marcel Fengler one of today’s most exciting electronic artists.

"Foundation" by the Label Krill Music — Enjoy techno and experience immense talent from all over the world.

NO HOMOPHOBIA / NO TRANSPHOBIA / NO BODY SHAMING / NO SEXISM / NO VIOLENCE —OF ANY KIND.

Respect and be respected.