It is a humbling and immense pleasure to present absolute legend JOEL MULL, finally in Bergen! Joel has been on our wishlist since the late 90s! We cannot wait to dance to his set at what will be our first PLOINK night at Kulturhuset (main/ground floor) in Vaskerelven. PLOINK residents Miss Mostly and Thomas Urv will warm up from 22:00. Details reg tickets and more to follow soon. *** Note the new date - we had to move from september 17th to october 15th to make this happen (Thomas Urv will still dj at Kulturhuset september 17th though - look out for new face event). 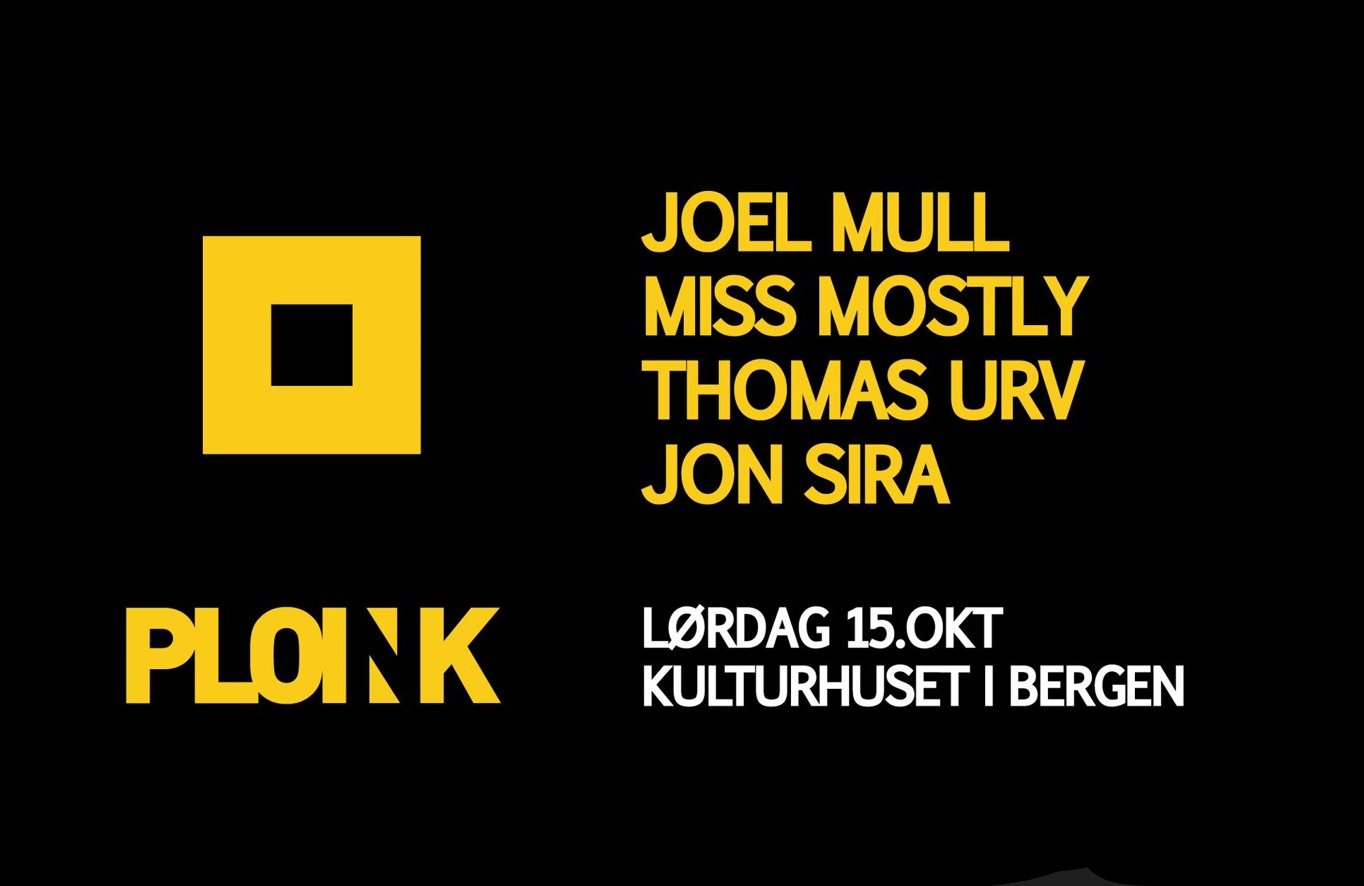 JOEL MULL
Mull’s introduction to techno came when he was 16 and made a pilgrimage to Manchester, UK’s storied Hacienda nightclub, propelled by his interest in that city’s early ‘90s indie dance scene. He was refused entry to the club for being underage and ended up in a basement with garbage bag-covered walls, lit by a stroboscope, flled with smoke, and techno blasting. This was Mull’s frst encounter with the sound. “I had heard acid house, Balearic stuf, but I had a mental thing with techno,” he says. “The disharmony, the weird sounds, it was so intense. I got really hooked.”

Upon his return to his hometown of Stockholm, Mull’s pursuit of techno led him to dance record shops, techno parties, and the rave scene, where he immersed himself in the sound. At the same time, he started at an arts high school as a continuation of his musical upbringing: singing in a boy’s choir from when he was seven years of age where he practiced eight hours a day and performed every weekend. This was another factor that drew Mull to techno.

“I was very tired of the square way of seeing music and its rules,” he says. “What techno did was break rules. You didn’t have to be a musician in order to create techno. It was another way of making music: sampling, fltering, efects, generating colors. It made me explore music more, gave me courage to search for diferent methods to combine music. It was, in a certain way, chaos, and that was attractive to me.”

Befriending likeminded peers, Mull’s brotherly association with another techno stalwart, Adam Beyer, began in high school. Spending days listening to Beyer’s record collection, it was from him that Mull learned how to DJ.

In 1994 Joel moved to Germany, Hamburg and thatpśwhere he learned to control a foor. For the frst six months he was resident at club called Labor, in the north, then becoming the resident at Unit in Hamburg, between 1995-98. Here, he leared warmup sets, closings and also did Marathon sets up to 10hours.

“The way I see DJing is telling a story,” says Mull—who despite the multitude of stamps in his passport makes a point of playing in his hometown at least six times a year to stay connected to the scene from which he came. “Your identity as a DJ is your way of telling the story. You have so much power behind the mixer, controlling these frequencies, you can make people forget everything and just be there in the moment. It’s not about bringing the noise and hands in the air, that instant reaction. For me, it’s about taking your time to build something, taking the crowd—and yourself—to a diferent place. Techno is about that hypnotizing, long-spanning journey. It’s where I come from; it’s what I strive toward.”

Mull’s production know-how started and moves at the same pace as his DJing. His initial forays into making techno happened in Beyer’s home where the two of them and their friends pooled their resources to obtain classic pieces of outboard gear: a synthesizer and a sampler, which they plugged into Beyer’s mixer and started experimenting. Their trial-and-error eforts gained them enough recognition to start releasing music on a multitude of labels.

You heard Mull on Nicole Moudaber’s respected MOOD imprint and Sasha’s standard-bearing Last Night On Earth—a particular badge of honor for Mull who considers Sasha a major inspiration. Over the years his productions was released under various alias as Icarus, Damm and more recently under his darker techno guise Gotzkowsky, Mull released the track Shoulder of Orion, on the Berlin- based label, Dystopian.

He continues to be part of Beyer’s Drumcode family and in May 2019 the second collaboration with Heiko Laux on the label.

Today Mull regularly releases on a variety of labels and most recently on Parabel, his frst album in 8 years, Arrow of time, (2019). Arrow of Time is infuenced by themes of traveling, time and the future;

”There is a certain loose feeling when I write music and sketch on ideas while I’m in a moving object that is blasting throughout space, such as a plane or a train,” he says. ”These moments are more intense for me than working on ideas in the studio. [Arrow of Time] is both the time capsule that we all travel in and the journey that you do every time you listen to music.”

“Techno is not as rebellious as when it started,” observes Mull. “People used to not understand music being made with computers and synthesizers and not ‘real’ instruments. They didn’t consider it music. The kids that went to techno clubs only drank water and danced their asses of. The clubs couldn’t make money of of them.

He continues, “But techno was always the music of tomorrow. I knew that way back then. The formula of techno is so basic everyone catches it. At a time when you’re getting bombarded with media and diferent frequencies, techno streamlines everything, gathering people into one frequency that feels harmonic and united, a feeling of being together.”