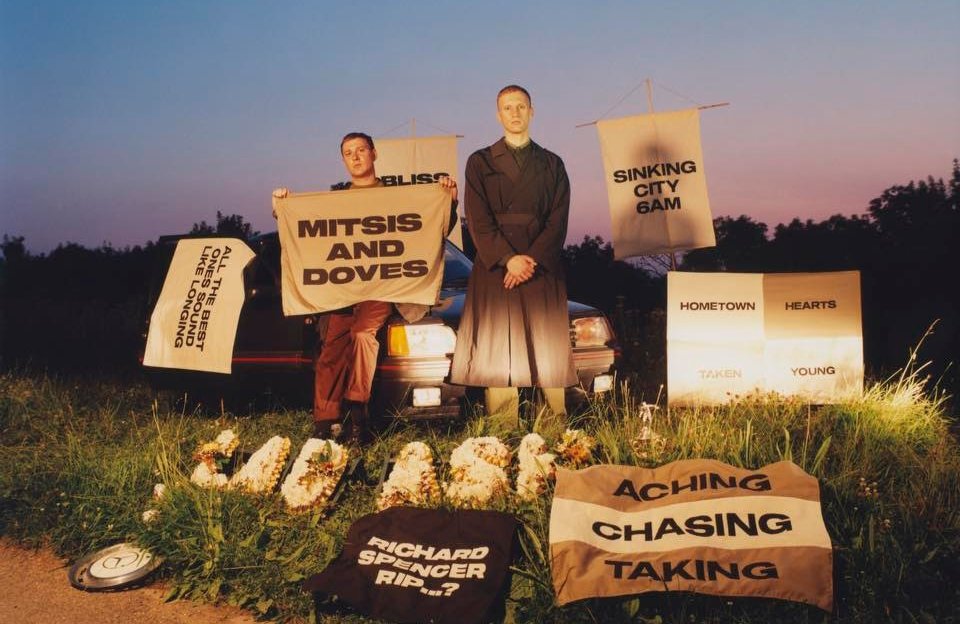 REAL LIES:
Six years is a long time to spend walking in the rain. The late-night city music of Real Lies has always acted as both tribute and portal to London’s rain-lashed streets, the sound of youth urgently hunting down the next basement bar, the last club queue, one more afterparty. In the euphoric, heat-seeking songs of their 2015 debut album Real Life, it felt as though there was always somewhere else to go, another riotous destination looming into earshot through the sirens and heavy weather.
Yet as the intervening years slipped by, it was tempting at points to wonder if Real Lies were ever going to come in from the storm. Or if maybe they’d lost their way. “I think both those things can be true,” says lyricist Kevin Lee Kharas. “And that in the end, losing our way is what saved us.”
Lad Ash, the remarkable second album from Real Lies, is the work of a group who’ve spent half a decade falling apart and rebuilding themselves. Most obviously, they’ve lost a body: founder member Tom Watson leaving Kharas and producer Patrick King to plot their own way forward.
There have been other losses to withstand. The collateral damage of heartbreak, addiction and psychosis. Of going broke and losing hope as vast tranches of memory vanish overnight, along with cherished friends from a halcyon, reckless youth. Some, gone for good. Others AWOL in the ether.
Then there’s the mourning that is more universal. The constellation of capital city night spots that formed the world of Real Lies’ debut has been decimated in the years since its release. With it has gone the carefree, party-boy lifestyle exalted in tracks like ‘Dab Housing’ and ‘Gospel’.
Yet, after years in the doldrums, the record Real Lies have re-emerged with was birthed by a sombre but liberating epiphany: that loss itself should be this album’s motor. Every track on Lad Ash is a farewell to something. Whether that’s a departed bandmate (‘Boss Trick’), a long-term love affair (‘Ethos’), a friend who went missing in mysterious, possibly fatal, circumstances (‘Dolphin Junction’), or pre-teen innocence (‘An Oral History Of My First Kiss’).
The result is a pair of ironies. The first, that an album as elegiac as Lad Ash can sound in places so rapturous. The second, that amid this ecstatic tribute to loss, all the traits that make Real Lies special not only endure but return elevated to new levels. Singles ‘Late Arcades’ and ‘Since I’ showcase the group’s power to amplify the transient details of the day-to-day – or, more accurately, the night-to-night – into myth and romance: to alchemise the humdrum into cinema.